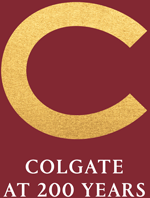 Colgate University launched the Bicentennial with a kickoff weekend in September 2018. That one short sentence belies the scope of the project and years of teamwork that went into the celebration, which was presented online, in print, and in person with the ever-present goal of highlighting the University’s past as a preface for its future.

Words
The celebration was driven by a series of partnerships, formed long in advance of 2018. When it came to chronicling Colgate’s history, the Bicentennial Committee decided early on that it would not merely commission an addition to A History of Colgate, 1819-1869, written by Howard D. Williams for the 1969 sesquicentennial. Instead, the group sought a comprehensive work that would focus historical and societal currents; engage issues of race and gender; and offer a broader sense of the student body.

James Allen Smith ’70, historian and vice president of the Rockefeller Archive Center, agreed to take on the project. The result is Becoming Colgate: A Bicentennial History, a rich and frequently moving book. Colgate was also fortunate in the devoted work of author, lawyer, and journalist Diane Ciccone ’74, who was a member of the University’s inaugural first-year class of women (entering 1970), a former trustee, and a founder of the Alumni of Color organization. During the Bicentennial, Ciccone completed her own book on the history of African-Americans at Colgate, Into the Light.

Branding
The bicentennial offered Colgate an opportunity to review and evaluate its overall brand identity. The University engaged the international design firm Pentagram to begin a series of projects, beginning with a Bicentennial brand that we released at the beginning of the Bicentennial year. Our goals for the branding project included: enhancing the quality and diversity of our students, faculty, and staff; building upon the recognition, reputation, renown, and understanding of Colgate around the world; and raising awareness and appreciation for the quality of Colgate among the national academic community.

Based on this work, the University developed the website 200.colgate.edu in a collaboration between the Office of Communication and the University Archives. The site chronicled, and — where appropriate — celebrated the past, the present, and the future of the school. The site’s main goal was to build active and continued engagement with former and current students, faculty, staff, and others with a connection to the Colgate community. It served as a springboard for re-engagement, as well as a platform for articulating a vision for Colgate’s future, building engagement toward the upcoming campaign.

The Bicentennial website launched in August 2018. Notable events and individuals whose legacies were, to that point, underrepresented or lost to time and memory had their stories told. Scholarly investigation by students and professors informed some of these stories.

Deeds
At 200 years, Colgate has a global reach; so, too, Bicentennial events in Hamilton, around the country, and abroad provided those near and far with a chance to celebrate — while enjoying the friendships that come with membership in this remarkable community.

The ideas for kickoff weekend, Sept. 21–23, 2018, came from various individuals, focus groups, the Bicentennial Committee, and campus departments, particularly advancement, athletics, dean of students, dean of faculty, and career services. Including students and the local community in the anniversary provided generational and geographic scope that was crucial to the spirit of the commemoration. We kicked off the weekend on Friday with 13 food trucks on our large field and a pep rally for Saturday’s home football game, followed by an orchestra performance by Symphoria, from Syracuse, N.Y. The following day, we had a tailgate for the football game for 2,000. At halftime, the Colgate crowd came out on the field and made a giant “C,” which was filmed and photographed by drone for future use. That evening, 5,000 people packed the Sanford Field House for an outstanding performance by Earth, Wind, and Fire — selected for its appeal across age groups.

Driven to be the finest undergraduate institution in the nation, Colgate is also looking forward, powered by the energy and creativity of this community, with a strong vision for its third century. The University, forming partnerships to ensure the success of its Bicentennial, kept this fact top of mind as it moved forward with the celebration in words, images, and activities. The proof of its success can be seen both in the community response to the anniversary as well as its wide-ranging support for subsequent, related initiatives — the University’s 2019 comprehensive rebranding and launch of The Third-Century Plan.