Article excerpt edited from the NFL “Elevating the Fan Experience.”
Authored by and printed with permission from the NFL

As one of the first NFL teams to celebrate their 100th Season, the Green Bay Packers have set precedent for how impactful the celebration of their iconic anniversary can be those around the League. In their 100 Seasons in the National Football League, the Green Bay Packers have amassed 13 Championships, more than any other team in history. Celebrating the team’s rich tradition was a core principle to the ideation of the Packers 100th celebration.

The Packers celebrated their 100 Seasons during the 2018-19 season, however the planning for the year-long event started five years ago, prior to the official launch. With key stakeholders identified and ranging from Senior Executives, to HR, PR, Marketing, and well beyond the front office staff, the team was able to develop a vision and mission for their 100 Seasons campaign. The mission resonated across all departments and touchpoints of the team, with the goal being that the 100th Season should celebrate the Packers storied past and the future. From the inspiration of the mission statement, the team developed a series of goals that touched each extension of the team past and present from fans, community, players, and employees.

Goals were formatted into a variety of initiatives to further allow development and implementation of staff ideas:

Each respective goal had its own micro goals that had tangible results and numbers tied to them to recognize success.

One of the first tasks that the team performed was survey internal staff to get their take on how knowledgeable they feel about the Packers history, how the staff feels about organizational history appreciation, and how the staff feels in general about the celebration. The club found out that people truly wanted to be involved with this historic celebration from the top-down. The working group for the anniversary went to the head of every internal department and requested that everyone submit ideas for the 100th, season making sure to involve employees cross-organizationally with the 100 Season celebration. The next step was a follow up to help answer staff questions.

Coming out of the employee surveys, the working group categorized everything from small to big ideas and took the top thoughts to the senior level committee and laid out what was feasible. The group built a chart to identify all of their audiences (local, regional, national, international), demographics (kids/adults), cost, and implementation time both in- season and during the offseason. The organization knew it was important to maintain engagement throughout the duration of the year and connect with a wide audience ranging from players, alumni, staff, fans, on a domestic and global level.

The team made it a priority to over inform staff because they knew that they were the front lines in communicating the history and engaging with the fans, players, and the community. To educate staff, the team added a wealth of information to their internal website, "Packnet," added signage in breakrooms, created a monthly newsletter and provided information in employee breakrooms.

The Packers started teasing their 100th anniversary plans at a shareholder meeting in 2017 and then flipped all assets and branding in April of 2018. The launch took place on April 9th at Lambeau Field. See launch here: https://www.packers.com/video/packers-begin-100-seasons-celebration-20525843

During the launch event, the logo was also unveiled through a video piece. See it here: https://www.packers.com/video/packers-reveal-100-seasons-celebration-20523385

On the heels of the assets flip, the team launched 100 days of giveaways to ensure the organization-maintained engagement and did not have a lull in content. From April 9th to July 17th of 2018, fans were able to win prizes including free pizza for a year, two tickets to a 2018 Packers home game + a $500 travel voucher, $100 Packers Pro Shop gift cards, and 100 Seasons prize packages. See the campaign here: https://app.wyng.com/5a9f029af837ea1b7eddcee6

Fans were encouraged daily to enter to win the sweepstakes for the 100 days of giveaways, and through the consistent fan contact, the team garnered close to one million entries and additional visits to the website over that 100 days.

The new users were integrated into their data warehouse, with the team using the information to create valuable lists for upcoming events, traveling exhibits and future marketing needs.

Activations surrounding their 100th Season were promoted through email, paid and organic social, PR, newspaper, radio as well as banner ads on packers.com.

The Packers also created a four-day Fan Festival named the “Packers Experience” throughout their footprint. The four-day festival included a wide variety of interactive games and activities as well as live music and bands, local food and beverages, and the opportunity to interact with Packers players past and present. Watch the set up of Packers Experience: https://www.packers.com/video/time-lapse-packers-experience

As part of a state-wide tour, the Packers also created a travelling exhibit called Lambeau Field Live (presented by Associated Bank). The 80’ x 80’ exhibit had a goal of delivering Lambeau Field to those around the state. During this exhibit 10 stops were planned at various Wisconsin-based festivals. The exhibit contained an award-winning exhibit called “Interact with the Pack” by Associated Bank that was virtual reality-based wherein fans could take a virtual image on Lambeau Field with a current player or alumni. It also included a mini Packers Hall of Fame exhibit, a Packers Pro Shop that sold retail apparel, a large screen for videos and sponsors, bleacher seats and lights to mirror the stadium environment, photo opportunities with alumni, historical presentations, Play 60 engagement for kids, instant win prizing/data collection and of course the Lambeau Leap! See Lambeau Field Live on the road: https://www.packers.com/video/lambeau-field-live-takes-over-summerfest

The Packers invested in the creation of a documentary to showcase the history of the team. The documentary is roughly 10 -15 hours with 1 - 1.5 hours dedicated per decade. Production and research for the documentary started three years ago. During the process, the team utilized the library at NFL Films, and hired an outside company to help them accumulate over 110 interviews over the course of a year and a half.

In total, the group went on to collect over 2,000 photos from local museums and newspapers. The documentary will be available for viewing on Amazon, Apple TV, and Roku and will be available this fall. Here is the trailer: https://www.packers.com/video/legacy-100-seasons-of-the-green-bay-packers

The Packers’ internal digital team created a microsite (https://100.packers.com/) dedicated to their 100th Anniversary that included a popular uniform video showcasing all of the uniforms through the years (https://www.packers.com/video/packers-uniforms-throughout-history). On the microsite, fans were encouraged to vote on brackets with best plays, submit photos to tell their fan story, and learn about the rich history of the team.

Throughout the season, the team increased their media mentions, and international traffic on their platforms increased YOY. Additionally, the Packers included sponsorship involvement on many of the activations.

The team hosted a free birthday party in their Atrium at the entrance to the legendary Lambeau Field on August 11th, 2019. The event was open to the public and included a festival-like atmosphere. The party celebrated the history of the team, the fans that have made their legacy possible which included free grass seed packets for the first 5,000 fans (the actual grass planted at Lambeau Field) for fans, giveaways, birthday cupcakes, and the premiere of the first decade of the Legacy documentary.

Learn more about the seed giveaway and charity it benefits here: www.Packers.com/100seeds

A celebration that happens once in a lifetime is a special moment in team history and connects fans of all generations, producing memories that will live on for the next 100 Seasons. The Packers have truly created something special in Green Bay and successfully paid tribute to the team’s past while looking to the future.

Here’s to the next 100 years in Green Bay 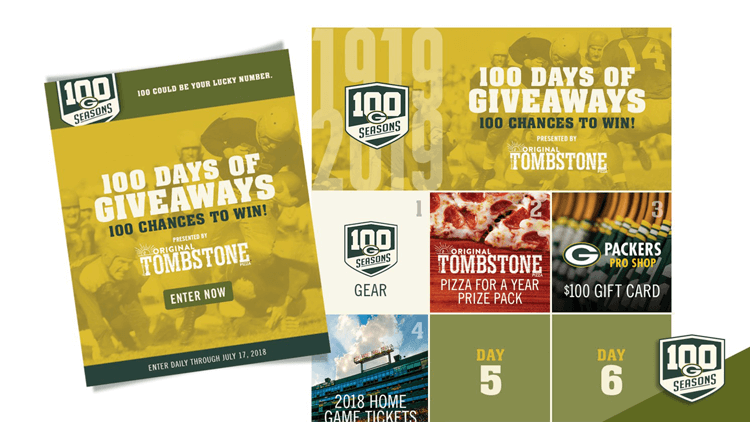